In present time, high atop a lighthouse perched at the south end of the island, sits Dwee. She is a remarkably short, 12-year-old girl with a full, physical stance. Her left eye is slightly offset, giving her a mystical appearance. She wears a black kimono-style top, with uniform styled pants that match the color of her jet black hair. She stares stoically out at the sunset fading on the horizon.

Her Grandfather, mid-seventies, with long gray hair, sits beside her on the other side of the wicker table, in an oddly shaped chair.

The ancient lighthouse looms over a dark cloudy ocean as the sun finally sets. The light mechanism has long since been removed. This adds an eery feel to the structure at dusk.

On the table between them is an unusually designed solar- powered short-wave radio with a tethered microphone. Dwee turns on the large knob. Static is heard from the tiny internal speaker.

She picks up the microphone, tapping it a few times, wiping off its dusty solar panel.

He yawns. She smiles, leaning in closer to him to whisper.

She picks up a Mayan headdress next to her on the ground. Instead of colorful feathers, its intricate design is made from thin, translucent-colored glass, in the form of sea-fan coral. Its artistry is mind-blowing.

Does this really broadcast to the stars?

Her Grandfather looks at her seriously.

Used to. Not anymore.

She thinks for a second, sits up straight in her chair, clears her throat, and changes into her alien character voice she loves to perform.

It is me, Dwee, alien visitor. I seek the rarest thing in your world.

Her Grandfather grunts as if he has heard this a thousands times.

You have to discover it yourself.

You know the rules. Next question.

Our spaceship crashed. I cannot return home. How will I survive your world?

She looks around at the island’s darkness.

You must make an agreement.

She looks at him confused, tilting her head a bit. 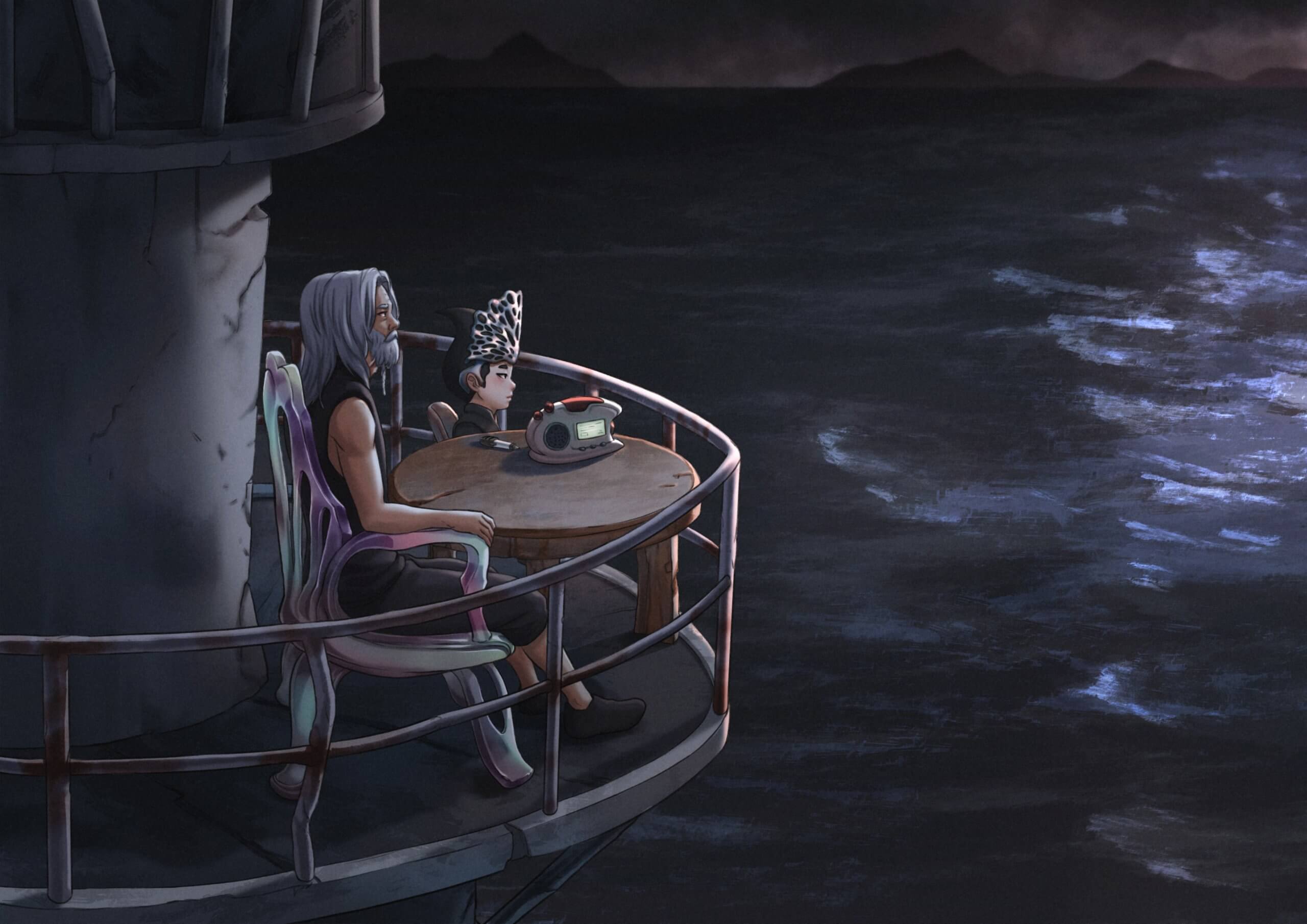 With yourself. No matter how hard, continue. Until the end.

She leans back thinking, propping her feet up against the railing.

This way, in the impossible desolation, you promised yourself you’d go on. And what lies beyond is worth your adventure.

Her eyes glow in satisfaction at his words.

I made it after arriving here.

She reverts back to her own voice, briefly.

I will make it then.

Grandfather nods in agreement. She adjusts her headdress back up on her head as it has shifted down over her eyes, then continues on in her Alien charactor’s voice.

What about my family? Won’t I miss them? The agreement won’t help.

Grandfather stands up overlooking the vast ocean. He breathes in deeply rubbing a glass pendant around his neck that is shaped like two colliding spirals.

Think of them now. Far away, back at the center of the universe. Can you see them, talk to them in your mind?

Now consider me, gone a thousand years. Can you bring me back here? Now?

She stands up and thinking awhile then looks over at him and smiles.

Then Space and Time have no meaning. Those we love are never gone.