"Space and Time" By Midori Meshitsuka

On a lifeless brown planet, far above in space.

In the not too distant future, the world was in its final stages. Like most living planets, it was born in fire and rain, cooled over time and grew into a beautiful kaleidoscope of life over millions of years.

Zooming in on an remote island in the southern ocean, above Antartica, near the Drake’s passage.

It was here, on a desolate island, that a young girl lived. She was one, of the remaining few, unique in her way, about to embark on the story of her life.

A story for all our lives…

Twelve years earlier, the wind sweeps through a playground on a dusty, deserted hilltop against a black-colored ocean far in the distance. On the swing sits an older man, mid-sixties, unusually tall, thin, with long black and gray hair.

He gently swings in what looks like an old, abandoned, handmade swing-set. He slowly rocks back and forth, whittling two concentric spirals that seem to collide together out of driftwood. Its artistic form is masterful.

An odd-looking woman approaches from the bottom of the hill. She is short and wide, yet perfectly symmetrical. Her jet-black hair resembles half of the ancient yin and yang form. She is visibly pregnant. Over her simple clothing is a small shoulder bag.

She struggles, exhausted, climbing the hill towards the old man. As she reaches the edge of the small plateau, gasping for air, drenching wet, she puts her hand to her knee. 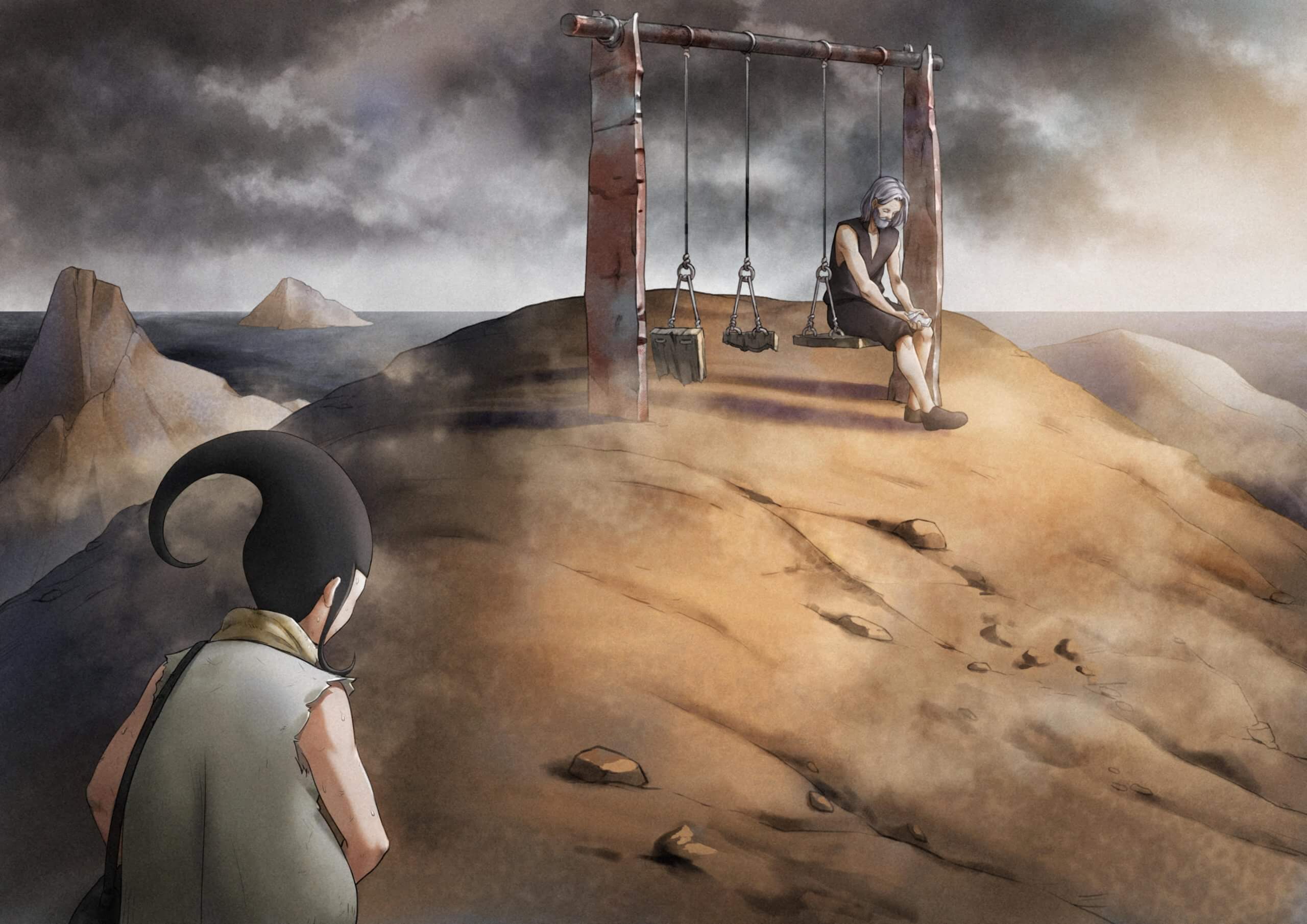 The old man continues whittling the spiral shape in deep concentration, oblivious to her approach.

She arrives on the side from behind him, thoroughly exasperated, putting her hand on the swing’s metal foundation. He jumps up, startled.

I’m sorry…Sorry to bother you.

She nods her head affirmatively.

I don’t have much time.

How did you get here?

I had a collision offshore. Was able to make it in.

She nods again, silently. The old man puts his hand underneath her shoulder and forces her to her feet.

Let me help you.

Where did you come from?

Far away. A place called The Gammalon.

Yes, I lived there as a boy… along, long time ago. No one was there.

He pulls her tiny shoulder bag off and offers to carry it. She examines the swing-set.

There are children here?

Never. This island is an abandoned research station. I made the swing set myself…after arriving.

She suddenly feels woozy falling back to the ground, nearly passing out. The old man bends down, picks her up and carries her back down the hilltop towards his dome house.